It started as a quiet rumble. Garth Brooks was going on a Dive Bar Tour, playing small honky-tonks and bars across the country. Would he come to Gruene Hall? He certainly should! With strong roots in the old wooden floor boards of the Hall, he played here in the 80's before the wheels of his career really started rolling, like many others– including George Strait. After much speculation, Garth finally announced that he WOULD be bringing his Dive Bar tour to the iconic Gruene Hall on September 23, 2019. And we were all in for a wild ride!


The day of the show, Gruene Historic District evolved in phases, getting ready to host thousands of Garth Brooks fans on their way from all over the country. First, the streets were shut down at 10am. This is also when the most loyal ticket-winning fans showed up at the Hall to start the line for entry. Next came the 2 jumbotron screens set up in different locations. With the screens set, lawn chairs started popping up with non-ticket concertgoers ready to wait hours to have the best view of 10-feet worth of Garth'y goodness. Pop-up bars, snack tents, first aid headquarters, and port-o-potties were all set up nearby, too. All the amenities anyone might need were here. Now we just need the star of the show!

Garth's crew started equipment set-up and soundcheck at 4pm that afternoon. By then, the street party crowd was growing. More chairs, more coolers, more Garth Brooks fans. The Gruene Hall doors opened to ticket winners at 5:30 and as they filed into the dance hall, the excitement grew. Showtime was scheduled for 8pm. Just a few minutes after 8, a shiny black car was seen driving slowly towards the Hall. And the crowd held their breath... 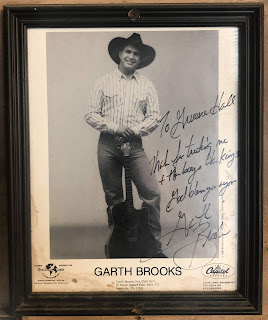 Rolling down his window for a quick wave to the fans outside the Hall, then crawling through the Willie Door on the side of the building, Garth was here and ready to rock! After taking the stage, and looking out at the crowd, absorbing the moment, Brooks said, "To be here in Texas, it just feels so right." And we were off!

The planned set list included 13 of his biggest hits, but Garth had moments of overwhelming nostalgia and asked his band to add a few spontaneous songs: "Amarillo by Morning" (which he prefaced by saying "Last time I was here, I wanted to be George Strait so bad. ...And today I'll still leave here wanting to be George Strait so bad!"), "Much Too Young" (which he played at Gruene Hall for a less enthusiastic crowd in the 80's), and "Beaches of Cheyenne."

While the last crowd he played for at Gruene Hall didn't know every word to every song, this crowd made up for it in spades. At several points, Garth stepped away from the microphone with hat over heart, relishing the moment, letting the crowd continue the song without his help. "This is exactly the way I wanted it," he said. Us too, Garth, us too.

Full set list:
"All Day Long"
"Rodeo"
"Two of a Kind"
"Two Pina Coladas"
"The River"
"Dive Bar"
"Ain't Goin' Down (Til the Sun Comes Up)"
"Unanswered Prayers"
"Amarillo by Morning"
"That Summer"
"Much Too Young (To Feel This Damn Old)"
"Callin' Baton Rouge"
"The Thunder Rolls"
"Beaches of Cheyenne"
"Friends in Low Places"
"The Dance" 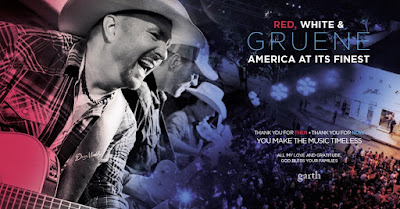 Posted by Gruene Historic District at 11:30 AM