When you think of famous icons with a history at Gruene Hall you might think of Willie Nelson, George Strait and even Jerry Jeff Walker or Hal Ketchum - but we can think of one famous local who has an even longer history at the Hall - Frank Schlather. After all, when Pat Molak bought the place back in the early 70’s, Frank practically came with.

So, who is Frank Schlather you might ask? He is a former saddle tree maker, lifelong hunter & marksman, husband, father and perhaps most notably, the unofficial “Mayor” of Gruene. He was a Gruene Hall staple, one heck of a dancer, and all that knew him knew that he had a big heart and beautiful spirit that more than made up for any lack he might have had in the looks department.

Frank had been frequenting the Hall for years and even had his own key when Pat bought the joint. Pat allowed him to keep the key in order to open up the Hall for the janitors early in the morning. Sometimes, Pat would find Frank asleep on a table in the beer garden (or maybe the pool table when the weather was cold) when he came in to open up - presumably this was the result of a long night of two steppin’ with the ladies. It was rare, but it happened and always made Pat chuckle.

One thing Frank loved to do was dance, and not one girl refused his offer for a twirl around the dance floor. He sure had a hand – or should we say boot – in polishing those beautiful boards. Frank was genuinely famous at Gruene Hall – people came in to the Hall just to see Frank, and take a photo with him, for which he always provided a cheerful precious grin. He had a caring word for those that needed cheering up and lent an ear to those that just needed to talk.

Hadlock and Fox Saddle Tree Manufacturing Company was across the street from Gruene Hall way back when, and that was where Frank worked for a number of years. He also lived down the street from the Hall in a perfectly pink house.
Being within walking distance of Gruene Hall had its advantages for Frank. After a long hard day at work he would come in to the Hall and ask for a “tranquilizer”, his favorite – a cold Falstaff beer. He was loved by employees at the Hall, owners Pat Molak and Mary Jane Nalley, and generally everyone he met. Frank could be found in his crinkled up cowboy hat at almost any event that took place in Gruene, and even participated in a few.

So in honor of Frank, every year on his birthday – June 23rd we have a special event at Gruene Hall and celebrate Frank by offering beers for $.50 from 12-2pm – just how he liked em – COLD. 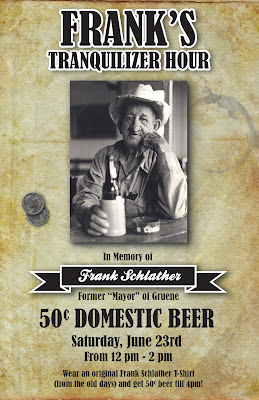