Ever heard of the Pony Express?
We’re sure you have, but just in case, here’ s a little history:

The Pony Express began on April 3, 1860 and only lasted about 19 months. By utilizing a short route and using mounted riders rather than traditional stagecoaches, letters traveling between St. Joseph, Missouri and Sacramento, California were delivered in just 10 days. It was extremely fast for it’s time, but also extremely expensive. Once the telegraph arrived on the scene in October of 1861, the Pony Express became obsolete and ceased operation two days later. 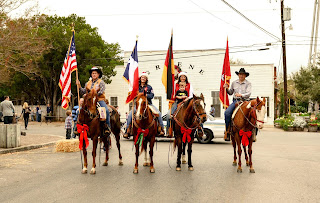 On Saturday, December 2nd we will have our very own Pony Express stop! We will welcome riders from the Heritage Trail Ride Association of New Braunfels who will ride into our historic little town as members of the Pony Express. At 10 am riders will relay the official “Christmas Greetings” from the Governor of Texas. Immediately after, a pop-up US Post Office branch will be set up right next to Gruene Outfitters where you can get your stamps cancelled with the 2017 commemorative stamp representing Gruene. That means it’ll be postmarked Gruene, Texas! There is only one day a year our “post office” is in business and December 2nd is it! 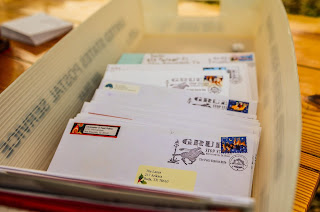 Once you’ve had those Christmas cards stamped hang around for pictures with Cowboy Kringle and our Gruene Town Lighting happening later that very same day. You can also stop by Cotton Eyed Joe’s to get a Cowboy Kringle postcard and some Gruene Hall stamps!

Posted by Gruene Historic District at 2:41 PM No comments:

Since the 80s, Cowboy Kringle has been a part of our Christmas celebration here in Gruene so of course he will be here this year too- WOOHOO!

Create a Christmas memory with our own brand of Santa. Cowboy Kringle is decked out in cowboy gear and even rides in on a horse for our annual town lighting on December 2nd.  He’s quite a site to behold!

Pictures are printed on site and available almost immediately. Talk about instant gratification! You can even pick out, purchase and take home your Christmas cards the very same day. Packages start at just $15. Proceeds from sales on November 18th and 19th benefit Communities in Schools of South Central Texas.

For our full holiday calendar, check out http://gruenetexas.com/holidays.php
Posted by Gruene Historic District at 2:07 PM No comments:

It’s that time of year again! Halloween is over, Thanksgiving is fast approaching and we’re so close to Christmas we can almost smell the yule log and taste the hot cocoa. 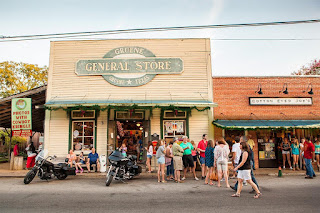 Here at Gruene, we LOVE the holidays. Our annual celebration kicks off with our Sip-N-Shop on Tuesday, November 14th.  From 5-8 enjoy complimentary beverages at participating stores, pick up your Kringle Cash, and get a jump start on your Christmas shopping.

What’s Kringle Cash, you ask? It’s only the best thing ever! One word: COUPONS. Loads and loads of coupons to use at shops around our historic town. Sip-N-Shop is the perfect time to start using your Kringle Cash and get a head start on Christmas shopping.

Mark your calendars, grab your friends and family and come see us!


For our full holiday calendar check out www.holidaysingruene.com 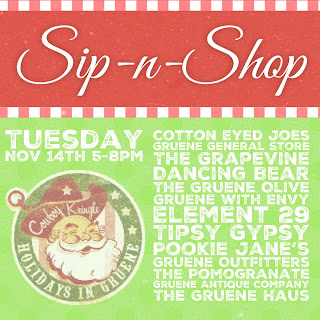 Posted by Gruene Historic District at 7:03 AM No comments:

Excerpt from New Braunfels Herald-Zeitung by Robin Blackburn, May 2016


One of the blessings of life in Central Texas is the spring and early summer weather. Sunny days and balmy nights beckon us outdoors for camping, picnics, parties, fishing, swimming, tubing, hiking or simply taking a walk through the park or downtown.
This time of year is also perfect for enjoying outdoor dining. New Braunfels residents have plenty of options when it comes to restaurants with patio seating — from casual to upscale. And with the variety of restaurants New Braunfels has to offer, you can eat Southern comfort food, seafood and more in the great outdoors.

"People have an innate desire to be in nature, and the closest they can get is dining outside," said Mary Jane Nalley, co-owner of The Gristmill in Gruene. "It's always kind of been a thing, I think. You can't usually go for a walk in the woods once a week. And there's a part of us that wants to connect with nature, even if you don't feel it consciously."

Nalley said that particularly with today's hightech, fast-paced lifestyle, people sometimes want to get away from it all and relax in the fresh air and feel more in touch with nature.

Particularly in Central Texas, Nalley said, outdoor dining is popular because of the climate.
"Our weather, for the most part, is really nice," she said, noting that up north when winters are longer and colder than they typically are in this area, outdoor dining is harder to find and harder to enjoy.

Moreover, she said, "I think dining is a big part of people's entertainment these days, and the more experiential you can make it, the more enjoyable it is."

For example, people eating at tables on the sidewalk outside a downtown restaurant can enjoy people-watching and soaking in the atmosphere, and diners on a patio out in the country can find shade in a canopy of trees and enjoy being outdoors, Nalley said.

The Gristmill itself has vast outdoor seating capacity — about 300 people can dine among the trees at the historic site. Nalley said there are several different areas outside, which keeps diners from feeling like they're in a huge crowd. There is an outdoor biergarten where bands play on the weekends, dining areas covered by trees provide shade and smaller covered outdoor areas.

"It sort of has a treehouse effect," Nalley said. "It overhangs the bluffs, with the river below, and it's almost like being in the woods.

"It's really comfortable to be out there," she said. "You can hear the birds and the river."
Tucked away off of the main road in Gruene is The River House, whose outdoor dining area can seat about 50 people. The recently expanded patio also includes a bar where patrons can order beer and wine, and there's live music on the patio on Sundays. The patio backs up to a wooded area, putting nature within reach.

"There are times when you'll see 30 to 40 deer hanging out back there grazing," said Chef Collin Campion.

The outdoor area is particularly popular this time of year, Campion said. "For dinner, we fill this area up before we fill the inside."

"This is a nice place to meet up and take a break from shopping," he said.

No matter what part of town you're in or what kind of food you're craving, take the opportunity to enjoy some of New Braunfels' outdoor dining spots. With the variety of cuisine and settings available, you have plenty of chances to get in touch with nature with food and friends.
Posted by Gruene Historic District at 12:48 PM No comments: 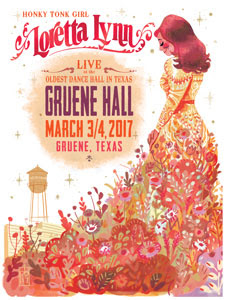 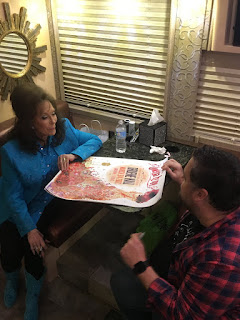 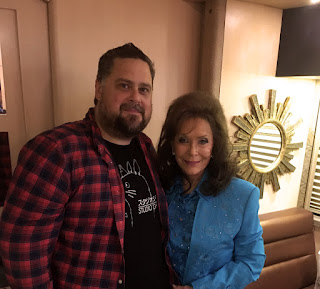